Get A Quote
& see how much you could save.

HOW CAN WE HELP YOU?

State Law Has Shut Down Uber Operations in Nevada

Uber is one of the fastest growing companies. Operating in more than 200 cities across the country, it is no wonder that the company made its way to Nevada. However, the taxi companies in the Las Vegas area were not pleased with this move and fought back, leading Nevada to be the first state to shut down Uber operations.

Uber was suspended in Las Vegas on November 26, 2014 during the influx of visitors for the Thanksgiving weekend. A Nevada Judge in Washoe County District issued an injunction that prevented Uber from operating throughout the state. The shutdown came just a month after Uber started providing services in Nevada, with the first ride taken the “The Killers” front man, Brandon Flowers.

Almost immediately after the service opened, the Nevada Transportation Authority and Nevada Taxicab Authority fought back against Uber with injections that allowed police agencies to arrest Uber drivers and impound their cars for operating in the state. There were more than 50 incidents that were recorded of drivers being arrested in the Reno and Las Vegas areas.

The transportation lobbies in Las Vegas have long been blamed for standing in the way of more efficient public transportation methods from the McCarran International Airport to the Strip, (unofficially of course). Since Uber defines itself as a technology company instead of a transportation company, it allows them to bypass transportation regulations. However, state regulators are claiming that Uber drivers are acting as unlicensed and illegal carriers. Even though Uber says that they thoroughly investigate all of their drivers and require them to carry company provided auto insurance, state regulations have stricter requirements.

For more information on the Uber shut down, and how it could affect your travels, contact All Nevada Insurance in Las Vegas, Nevada.

The holidays are just a couple of days away, and if you are looking for the perfect recipe that the whole family will enjoy, look no further! Try this delicious cider braised pork shoulder recipe that everyone will love.

All Nevada Insurance in Las Vegas, Nevada would like to wish you and your family happy holidays! 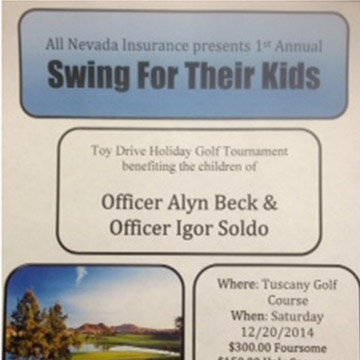 On December 20, 2014, we held our first annual golf tournament at Tuscany Golf Course to benefit the families of the two fallen officers from the CiCi’s pizza tragedy on June 8, 2014. All monies raised went toward Christmas gifts for the four children and two wives left behind.

With the holidays just around the corner, you may find yourself leaving your home vacant to go visit your loved ones. While you are enjoying your vacation, it is important to do all that you can to keep your home safe. Installing the right home security system is the best way to ensure that your home is protected while you are away for the holidays.

There are many benefits that are associated with a home security system. The biggest benefit is knowing that all of your loved ones are safe while they are home. A security system will also give you peace of mind while you are away, knowing all of your belongings are protected from theft while your home is empty. As an added benefit, most homeowners insurance companies will give you a discount on your policy if you have a security system installed.

For all of your homeowners’ insurance needs, contact All Nevada Insurance in Las Vegas, Nevada. We will work with you to ensure that you qualify for the best discount with your alarm system so that your home insurance coverage will fit into your budget.

Please support our First Annual All Nevada Insurance Golf Tournament, “Swing For Their Kids” benefiting the children of Officer Alyn Beck and Officer Igor Soldo on Saturday, December 20th at Tuscany Golf Course.  Shotgun tee off starts at 11:30am and a reception will follow.  For more information, please contact Paul Maxwell at 702-979-6232 or paulm@lvws-staging.site.

Thank you all for your support!

Your homeowners’ insurance policy should provide enough protection for most situations that you run into during your party. The policy will provide coverage for any medical bills in case someone slips and falls. The policy will also provide coverage in case people get a serious case of food poisoning from the food that you serve. Make sure to talk with your insurance agent before throwing your party to ensure that you have the right amount of coverage.

If you are serving liquor at your holiday party, make sure to invest in a separate liquor liability policy. Accidents are more likely to happen when you serve alcohol, which is why it is vital to make sure that you are protected. If one of your guests leaves your holiday party after a few too many drinks and causes an accident, you can be held liable. A liquor liability insurance policy will cover the cost of any legal fees that are associated with the accident to ensure that you are not financially devastated from one accident.

Along with having the right insurance policies, there are certain steps you can take to help make sure that everyone stays safe during your party. Make sure to serve plenty of food and non-alcoholic beverages to help prevent anyone from getting too intoxicated. Also, keep the number for a taxi service on hand for anyone that may need a ride home.

For all of your insurance coverage needs this holiday season, contact All Nevada Insurance in Las Vegas, Nevada. We will work with you to make sure that you have the right amount of protection for your holiday parties.

For all of your auto insurance coverage needs and to make sure that you are properly protected in case of an accident, contact All Nevada Insurance in Las Vegas, Nevada. We will work with you to ensure that you have the right amount of coverage at the right price for your budget.

The holiday season is officially here, which means it is time to break out your festive lights. While finding the perfect placement for all of your holiday decorations, it is important to make sure you know how to stay safe while climbing a ladder. Keep these ladder safety tips in mind to be sure that you do not have any accidents when hanging your holiday decorations.

Having the right homeowners insurance policy is the best way to ensure that you are covered from any unfortunate situation while hanging holiday decorations. Contact the insurance experts at All Nevada Insurance in Las Vegas, Nevada for all of your insurance needs.